How Shopify Scaled up Multidisciplinary Construction Teams for Massive Growth

Established in 2004 in Ottawa, Canada, Shopify intended to be an online snowboarding store but grew into an eCommerce giant. Facing the challenge of maintaining their cultural identity as they built around the world, their facilities team adopted PlanGrid within Autodesk Construction Cloud™ to quickly scale office locations consistently while keeping projects on schedule.

How to Scale Construction with the Right Partners and Tools

Shopify’s founders wanted to start an online snowboarding store, but their biggest frustration turned into their most significant breakthrough after the first few years. They had struggled to find an eCommerce platform that was flexible enough for them to sell the equipment they wanted to offer. So they decided to build the platform they wished they’d had and offer it to the world. Now, fifteen years later, Shopify is one of the world’s top multi-channel eCommerce platforms.

But that growth came with challenges. Such rapid growth meant they had outgrown their roots in Ottawa and needed to expand to new offices in new cities quickly. First and foremost, they wanted to retain their cultural identity as they opened offices around the world. But simply giving their teams a workspace wasn’t enough. Office spaces have become a primary asset in the effort to attract and retain tech employees. Shopify needed to ensure that their office spaces inspired creativity, enabled work to happen, and sparked joy in employees’ hearts. 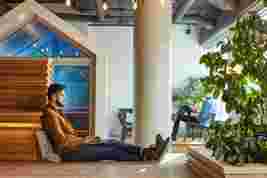 How to Manage Large Scale Collaboration with PlanGrid

Shopify hired Bernard Haddad and Baron Bryant as their Project Development Lead and Program Manager for their Real Estate division. Early on, construction projects were small and limited enough that everyone on the project team could sit around one table and talk. But as the company grew and they expanded into different project teams, Shopify needed better solutions to foster collaboration.

Haddad and Bryant were introduced to PlanGrid by a General Contractor on one of their projects. They started syncing all project plans and documents through PlanGrid, and now exclusively manage construction data through the application.

“We’re bouncing from project to project. PlanGrid helps us by keeping all that information organized and in one place. It’s the source of truth.” 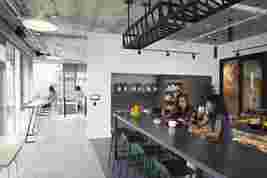 All the hard work and coordination amongst the construction team has paid off. Despite the rapid expansion and tight schedules, the Real Estate team hasn’t missed an opening date for any of their floors or offices. That’s no small feat considering the company’s exponential growth in the past couple of years.

And the growth continues. Shopify’s ongoing success means that the Real Estate team works in multiple cities, on multiple sites with varying schedules and complexities.

Fortunately, Shopify standardized on PlanGrid across all of its projects and with all of its external teams. The solution enables them to stay organized on updates across multiple projects as they happen.

“PlanGrid provides a way to see everything on one set of drawings, through one platform–it speeds things up. It helps out in the field because if you see an issue, you quickly pull out your phone or tablet, and you have all the information in the palm of your hand. Back in the day, before PlanGrid, it was so inefficient and took a lot longer. Now, it’s easy to streamline decisions”