To deliver a complete and extensive infrastructure upgrade on the St. Louis University’s 200-year-old north campus, McCarthy leveraged the combination of BIM 360 within Autodesk Construction Cloud™, Autodesk’s AEC Collection, and underground mapping capabilities to design, coordinate, and install over 30,000 linear feet of new infrastructure with zero significant utility strikes from start to finish.

How McCarthy Aligned People, Process, and Technology from the Start

With a condensed timeline and scope on the St Louis University project, the team knew they needed to do everything possible to set themselves up for success. McCarthy leaned on its Integrated Virtual Builder (IVB) initiative — a new mindset and approach to planning, designing, coordinating, and building virtually before building physically — to align all people, processes, and technology from the start. This initiative included the following major steps:

The IVB initiative leveraged backward-planning to answer the question, “How are we going to use 3D modeling to accelerate subsurface utility design and coordination on a complex design-build project?” The answer was a targeted approach to map, design, coordinate, layout, and build.

The team used several geophysical locating technologies to accurately locate and depict the existing underground infrastructure, creating a reliable two and three dimensional foundation. The information was then incorporated into Autodesk Navisworks and connected to BIM 360, where the team could visualize their design concepts with 3D model mapping for accurate proposed alignments and high-level execution plans. These models helped stakeholders and owners visualize and analyze any potential design, construction, or site-specific challenges.

“Without a truly integrated team effort, this project would have broken down. Aligning expectations early surrounding member responsibilities and how the existing and proposed data would be collected, protected, and communicated was critical to the team buy-in and success of this project.” 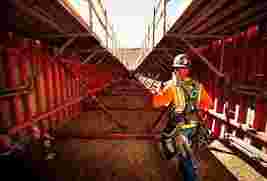 A New Level of Coordination Across Multiple Divisions and Partners

Coordination was critical to the success of this project, in more ways than one. Due to the tightness of existing conditions, McCarthy needed to ensure alignment on modeling accuracy given the model-based approach for site layout. The model had to serve as a source of both truth and trust and needed to be drawn correctly so it would work in the field.

McCarthy leaned on BIM 360 to create transparency and awareness in the coordination process. Coordinating the design-build approach across multiple divisions and partners required continuous communication through regular meetings, daily check-ins, and adherence to the project-specific VDC plan. The model-based field-layout approach helped McCarthy take BIM to the field and get onsite workers in the field to trust the 3D model. Everyone involved in the project could review each other’s models at the field level through the different photo structures in the BIM 360 environment.

This phase of the project helped establish a new standard for horizontal work at McCarthy and Castle, as it challenged the team to take extra care in the model coordination process.

“The development of the new standards and processes ensured teams were communicating and coordinating closely to reduce rework. Having visibility into the most up-to-date model on a centralized platform promoted value-added decision-making.”

McCarthy Continues to Build on Success

The integrated approach McCarthy took with this complex design-build project resulted in 40% less risk than traditional utility delivery methods. By aligning people, process, and technology, McCarthy’s teams delivered the project on time and under budget while creating a successful partnership with St. Louis University.

The use of BIM 360 as a common data environment also made handing over data to the owner at the close of the project a breeze. All of the federated models were updated and centralized in a common repository for the owner at the end of the project. This information allows the university’s facilities team to know precisely where installations are located to minimize downtime and streamline maintenance activity.

As a result of their strategic approach and performance on the north campus, McCarthy is looking forward to continuing their relationship with St. Louis University through several recently awarded projects.

“McCarthy’s proactive approach to identifying subsurface utilities at the start of the project was key to completing the job safely and on schedule. The overall footprint was minimized as the team knew where to dig and where not to dig based on the 2D and 3D mapping information.”