The Milwaukee-based team used multiple products in the suite to keep the project staff on target and ensure success.

Mortenson is a family-owned firm with over 65 years of experience built on six pillars – safety, trust, teamwork, responsibly, service, and stewardship – of excellence. Centered around exceptional customer experience, Mortenson is committed to innovation and enhancing community through a built environment and specializes in a diverse array of industries across several regions.

Mortenson recognizes that individual projects have individual needs. To allow for agility inside its standards, the team has purposefully sought solutions for an ecosystem of tools responsive to the demands of any one project’s delivery strategy, customer, and market environment.

To develop an ecosystem that supports the Integrated Team outcome across builders, designers, and customers, the team first focused on gaining efficiency and improving communication in design and preconstruction. To address this challenge, Mortenson deployed Autodesk Construction Solutions, the cornerstone of which has been BIM 360 and Assemble, for integrated 3D modeling to create a single source of truth.

"The faster cadence of publishing files on a single platform allowed estimators to access real-time information and deliver estimates to the design team much faster. We went from waiting a week and a half down to two days."

The Problem: A Change in Project Delivery Method on a Large Hospital Project

The Mortenson team in Milwaukee was tasked with construction on the Aurora Medical Center Mount Pleasant project, a 296,000 square-foot medical center. The Wisconsin-based medical center will offer inpatient care, surgical services, an emergency department as well as many other ancillary services including rehabilitation, imaging, laboratory, and pharmacy. Mortenson broke ground on the more than $200+ million combined hospital and medical office building in mid-October 2019, and the hospital is targeted to open in early 2022.

Originally contracted as a design-build project, the owner, Aurora Health Care merged with neighboring network, Advocate Health Care and the project changed to Integrated Project Delivery (IPD). With an aggressive preconstruction schedule and a Lean, integrated contract type, Mortenson needed to work with all project stakeholders to implement the right tools and processes and go about the design phase in a different mindset than they typically would. 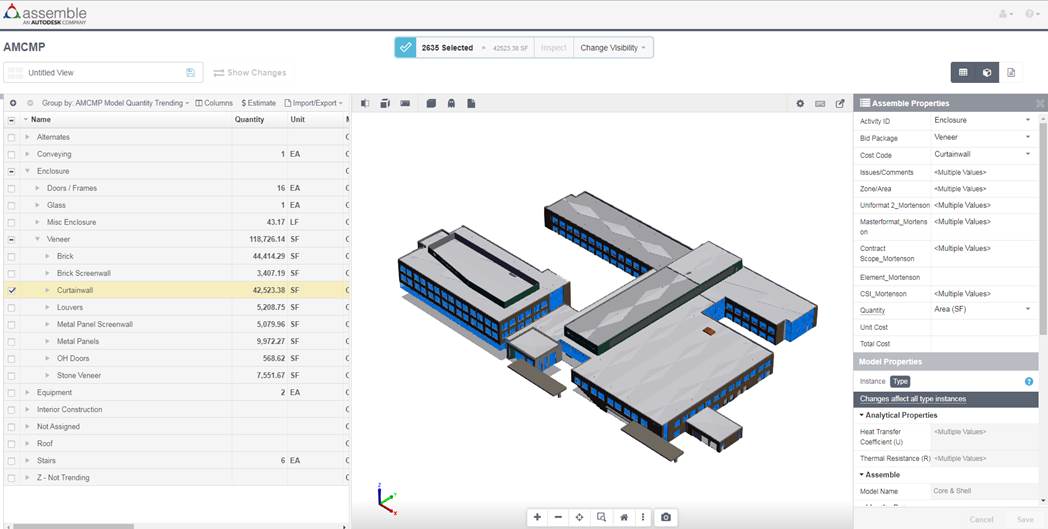 The Solution: Taking a Model-Driven Approach for Scope and Budget Alignment

Mortenson used a ‘One Model Approach’ on the Aurora Medical Center Mount Pleasant project. This approach is where design and estimation processes were ‘model-driven’. Using Assemble’s 3D modeling views and data conditioning, Mortenson gave all parties – from designers to estimators to trade partners – controlled access to review a single model and contribute information as the design progressed.

“Trade partners were able to demonstrate knowledge of the project early on and use the model to conceptualize estimates and track where scope of work was trending,” says Scott Simpson, Senior Estimator at Mortenson.

Rather than all stakeholders creating their models from scratch, the model is co-authored between designers of record, trade partners, and fabricators. “Eliminating redundancy is a leaner approach that drives greater collaboration and results in greater coordination on the project,” says Kurt Theune, Director of Design Phase Management at Mortenson.

“We did not have to rely on a cumbersome method of model transfer,” says Theune. “The faster cadence of publishing files on a single platform allowed estimators to access real-time information and deliver estimates to the design team much faster. We went from waiting a week and a half down to two days. This is as close to real time as we could get.”

The team also relied on eight months of co-location for the project, sitting designers, trade partners, and estimators next to one another to create a seamless flow of communication. “Being co-located with the design team manifested itself into a faster way to consume the model and provide estimates,” says Simpson. “Instead of email being a bottleneck, I was able to speak directly with the designers and engineers for a high-level of collaboration and decision-making.”

This integrated approach accelerated the decision-making process by eliminating confusion, latency in transfer of information between the team, and ensuring scope and budget remained aligned throughout all phases of the project. The Results: Better Documentation and Coordination Leads to Efficiency Gains

The One Model approach has fundamentally shifted the mindset of design partners and trade partners, as they can see in real-time where design is trending and how it’s impacting budget. This led to greater conversation between project stakeholders, which yielded better documentation, more coordinated design documents, and aligned cost estimating to drive multiple efficiency gains.

“I can’t understate the importance of the collaboration,” says Simpson. “It wasn’t that we had a design team and a construction team, it was truly that we had a single team working on the building together.”

Working within a centralized platform helped Mortenson and its partners evaluate options more quickly. A big benefit of using BIM 360 and Assemble on the Aurora Medical Center Mount Pleasant was that it took away from time-consuming estimating tasks and allowed the team to have more meaningful conversations around project risk and opportunities, how can they protect those risks, and how do they plan and capitalize on opportunities for the project.

“By freeing up time, we were able to change the level of conversation from counting nuts and bolts, to how we can optimize the model and find areas of optimization that the model can’t produce, but would be impactful to the project,” says Theune.

The ability to use the platform to extract higher-level data allowed the team to explore incorporating additional programmatic aspects into the project. “Urgent care was not part of the original facility, but because of the process, we were able to incorporate additional shell space for this future program, which is not only valuable to the customer, but impactful for the community,” says Simpson.

With Autodesk Construction Solutions the project team was able to keep a steady line where variance in the budget was less than two percent. The team celebrated over $25 million in cost avoidance, incorporated $8 million in additional shell space to promote future value add, and maintained scope and budget alignment until the Target Cost was established.

By setting targets early and using data to communicate more seamlessly the entire project team was able to keep a pulse on where the project was trending. With Autodesk Construction Solutions, Mortenson and their partners eliminated redundancies, enhanced collaboration, and improved accuracy on the design and preconstruction phase on the Aurora Medical Center Mount Pleasant project.

"I can’t understate the importance of the collaboration. It wasn’t that we had a design team and a construction team, it was truly that we had a single team working on the building together."

Deliver projects faster with a portfolio of industry-leading cloud solutions, unparalleled in performance and simplicity.